Most people will know that #MyMPSHero is a chubby little boy with a big smile and an impressive head of curls. But of course there are many heroes in my MPS world and today I’m handing over to one of them. MPS siblings put up with a lot and my biggest boy, T, is no exception to that. We’ve always tried to be open and honest with him about Pudding’s condition but sometimes I do wonder what he makes of it all. T agreed to be interviewed by me for this blog post and I’ll leave his words to speak for him: 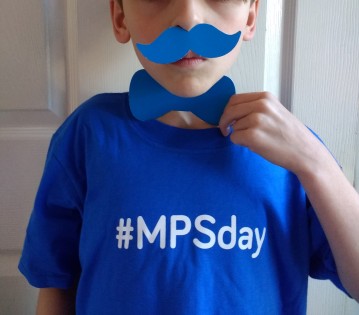 How would you explain Mucopolysaccharidosis to someone who has never heard of it?

It’s a disease that not many people get so it’s very rare. It makes lots of the parts of your body not work very well.

How does it affect your brother?

It’s stopped him from talking and he doesn’t really understand very much of what we’re saying. He never actually goes by rules of games because he doesn’t understand. I don’t like thinking about the bad bits because it’s too upsetting.

What’s the best thing about living with Pudding?

Cos of MPS that’s made him look really cute, so that’s nice. He also gives really good cuddles and kisses.

And what’s the worst thing?

That’s easy to say – he always hits us and throws books at us. Other things as well as books.

What is he good at?

He’s good at throwing things! And as I already said he’s good at doing cuddles and kisses. He’s also really good at football.

What do you think he’ll be like in the future?

I don’t really know. I’ve got an idea that some time there might be an antidote to MPS. But I don’t want it to stop him being cute though.

Do you have any advice to give other children who have a brother or sister like Pudding?

You’d better get good at dodging things. But try not to get angry when they do throw things because then that encourages them to do it again.

I know you didn’t like it when he moved away from the school you go to. Why was that?

I liked him being at school because he would roam around a lot, and sometimes he would come and invade our classroom and give me a cuddle. But I’ve got used to him not being there now.

Do you think you’d prefer that?

So do you think he’s the best brother you could possibly have? (incredibly leading question from the interviewer!)

3 thoughts on “Interview with an MPS sibling”