So what are communication problems actually like with a special needs child? Obviously vastly different from the ‘normal’ range, but also very variable within those who do have difficulties.

For ages I’ve not known quite how to describe Pudding’s language skills. Non-verbal definitely isn’t right – the child hardly ever stops talking. He doesn’t seem to mind who he talks to; me, a passing dog, a stranger, the hedge, his breakfast are all equally valid. It’s just that most of what he says is incomprehensible.

Apparently the technical term is emergent 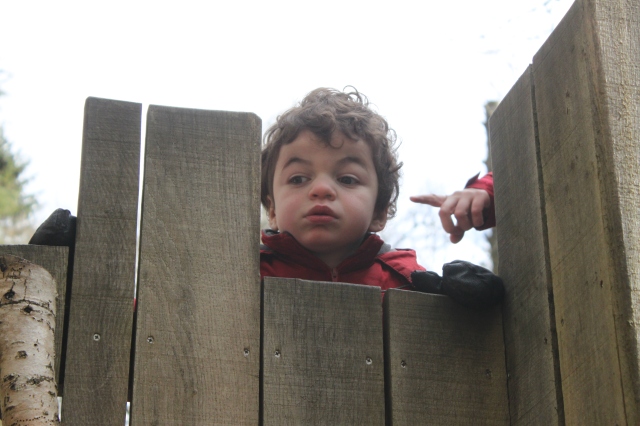 language skills. (Though that seems strange to me when they have been ’emergent’ for so long.) He is still continuing to improve, but unlike a child with no language difficulties, he takes a lot longer to learn any new words. He can still surprise me though: in our speech and language session this week he left me open-mouthed when he suddenly came out with ‘bike’ and ‘mug’, both said for the first time and so clearly with the consonants on the end. I think we’re past the magic 50 words now (typically reached by the age of two; Pudding is four) and probably adding a new word every two weeks or so. As expected at this stage of development, his words are often unclear too – he only uses a limited number of consonants at the beginning of words (mainly ‘b’, ‘d’ or ‘m’) and very few at the ends, so for instance ‘cat’ comes out as ‘da’.

So single words are increasing and he does have a few set phrases; ‘where are you?’ and ‘behind you’ are often used, though often other people have problems telling which one he’s saying! But proper sentences seem a long way off still.

You know that adorable stage that babies and toddlers go through when they are learning to make noises and there is loads of babbling sounds. Well, Pudding has been doing this for ages – it sounds like a sentence with all the intonation in place, and often one discernible word at the end. If he doesn’t get a response he can even repeat the same thing again and obviously expects an answer. He will cock his head to one side and wait for a reply. I’m probably the person who most gets Pudding-speak but my heart sinks sometimes when he is trying to desperately to be understood and I’m failing.

The worst aspect of this is the times in hospital when he’s been upset after an operation or dosing and I have no way of knowing whether he’s feeling sick or has a bad headache or is just generally grumpy and annoyed with us. Many other parents of minimally/non-verbal children will understand this stress. As a parent we’re hard-wired to help our children feel better and it’s so much more difficult if we have no clue what they need from us.

Language problems aren’t just about what the child can say – it’s also how much they can understand. Pudding has come on so much with this over the last year. We’re now pretty good on phrases with one key word (‘Where’s your coat?’, etc) and are moving on to understanding more complex instructions. He’s also getting better at some verbs (ok, any that involve playing ball..) but is still not keen on ‘wait!’, though that is most likely an objection to it rather than lack of understanding! Adjectives, prepositions, and so on? Let’s just say he wouldn’t be passing baseline assessments at school any time soon. As for more complex concepts, he has no clue. We don’t get the excitement about birthdays, the anticipation of Christmas. He struggles with ‘first…then…’ sentences and has no idea about consequences.

Someone asked me in February whether I’d told him he was going to have an operation. Um, no! That would involve him understanding what an operation is, and having a concept of the future.

He lives very much in the moment, which can be an advantage if I’m trying to distract him from his demands for food – ‘Oo, look! A bird!’ And if I’m honest has other advantages. When I’ve talked to other mums who have children with physical problems but no cognitive delay, I can see what challenges they face; their need to fit in with unaffected peers and find their place.

Sometimes I feel that perhaps we are the lucky ones. Pudding is blissfully unaware of all the issues and complications that MPS brings. He doesn’t worry about his health or the future or what others think of him. He is content when he has food, TV and attention. Our life would probably be easier if he had better language skills, but would he be happier? Probably not…